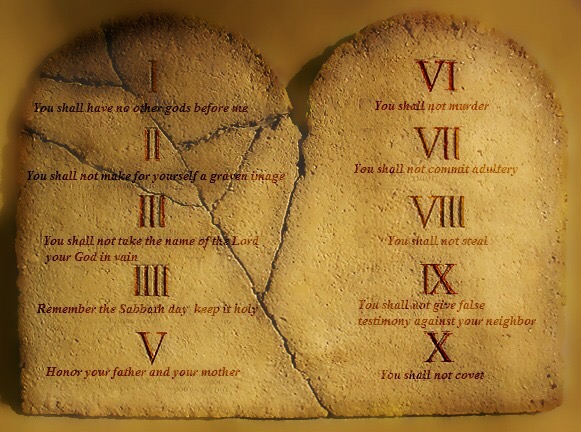 MESSAGE. In the second commandment we learn that our God is a jealous God. God’s jealousy is not like our self-centered love. We find Him to be a loving Husband to Israel (Jeremiah 31:31-33). He assures us that His care is greater than that of an earthly mother (Isaiah 49:15). He invites us to call Him Our Father (Matt. 6:9).  His heart expresses His protective zeal for those who are His by creation and salvation. He made us and rescued us to know and enjoy Him forever. How could we ask for anything more than a God who is so zealous—and jealous—for our happiness?

This Sabbath I’ll continue my “The Ten Commandments” series. We’ll learn together why in the second commandment our Heavenly Father calls Himself a Jealous God.

MINISTRY. Many volunteers showed up last Sabbath night to help our church get ready for the Spring Yard Sale. We were all sad to hear that Jackie Rose got sick the night before. His dear wife Juanita pulled a great team together and the Sunday Yard Sale was a success! $2,000 were raised towards a new sanctuary AC unit. Praise God! Thank You, everyone, who contributed household items, baking stuff, and your precious time.

Invite your friends to an outdoor concert presented by OAKS and Bowman Hill schools on April 9th at 4 pm on Cambridge Square in Ooltewah. Thank you, Wes Bradford for putting this concert together. This event will present an excellent opportunity to invite the community to our upcoming Bible Seminar. The seminar dates are April 26th though 29th at 7 pm. The seminar topic is “Reformation Today.”

PRAYERS. Richard Dahlberg is back home after surgery. Let the Lord grant him a speedy recovery.

Little Zoe has also been discharged from the hospital. Robert and Ty are grateful for your prayers.

Preston Jones had an eventful week. Here is an email that just now came from Connie: “Dear family and friends, This is Friday afternoon and we are just getting home. I will start at the beginning and try to give you an update of our week. Preston had an appointment with Dr. Chung on Tuesday to have a skin cancer removed. He took the medications prescribed that evening and had a reaction to it and was nauseated and terrible sweating and chills all night. The next morning I went to buy groceries and Preston decided to run into the office to get a few urgent projects done. As I was checking out my grocery, Michaela called (Miracle # one that I answered the phone) me stating that Papaw was not feeling well and was at Kennedy Clinic. I immediately went there and Howard had given him medication and had done a EKG and felt he should go to emergency and see if there was a problem.(Miracle #2 Preston was at Kennedy clinic and could get help.) I ran home to drop the groceries off while they were calling an ambulance. Jenifer was with Preston, Michaela went to help me empty the groceries. When, we drove up in the driveway we saw that Jimmy was there cutting our yard…I burst out in tears of thanks that he was there with us!

The ambulance driver was very stern that Memorial was full and he was referred to Erlanger. Jenifer told him his doctor was at Memorial and that is where we were going. He was exasperated and told us that he would be sitting in the parking lot in the ambulance for at least 2 hrs. We went to Memorial and my dear friend, Joanne Rozelle was volunteering at the emergency registration. She went into hyper gear and we are not sure how it all came about but Preston was in a room in 10 minutes. We were there until 11:30 p.m. before getting to CDU. The next morning Dr. Warren’s office had scheduled a Nuclear Stress Test. An opening became available at 10:ish and they were told they needed the results before 12:00 because a group of doctors were meeting together and could make the decision what would be the next step. Miracle again, they got the results and the group studied it and felt that an arteriogram was absolutely necessary to see what the stressed areas found in the test. They came to our room and told us we had 5 minutes to decide if we would agree to do it immediately or later. They had 7 minutes before the 24 hour time limit would expire for the blood work that they had done the day before. He had been fasting and there was a team in radiation that had just finished their last procedure for the day. We prayed and reluctantly said yes, we wanted to get the testing done. He was whisked away and about one hour later the doctor gave us the report that he had two areas that they had found that had to be corrected. They had put the two stints in and that Preston was doing well.

The doctor came out and had pictures of the work they had done. It was another miracle that something really bad had not already happened. Like a couple of days before he had picked up 2 very heavy batteries and installed them in the motor home. They had the arteries open and you could see the flow of blood running smoothly through them. We all had a “happy party” and thanked the Lord for orchestrating the last several days to this happy climax.

It was a rough week and yes, we would rather not have gone through it…but as we look back and see miracle after miracle how it all pieced together, our hearts are thrilled to know we have an awesome God that watches over us and knows every need. Some answers we don’t understand and others are more visible…Someday, we will understand that every happening is for our best good in the end.

Thanks to everyone for your concern and love. We will be rested and healed and going strong again soon.Your prayers are what we covet most and we will be forever grateful. The Preston Jones Family ”

Have a blessed Sabbath day. See you tomorrow,